This is completed course, available for On Demand Access for only 100 Days from the Date of Enrollment. Access this content Free of Charge for the allotted time period.

In Al-Imran, the idea of choice is taken further. On the one hand there is choice, but on the other hand there is a profound amount of hope that is being granted inside of this Surah.

This sura takes us back to the story of Jesus, peace be upon him, and retells the story.

This Surah explains the clash will intensify now that the Ummah is chosen as the Ummah that represents the truth of God to all of humanity, clashes with disbelievers also intensify.

– Finally in this surah you will find a merger, a strange merger, as He told the believers: {So do not weaken and do not grieve, and you will be superior if you are [true] believers.} (3:139)

There is an ideological conversation with the Jewish and the Christian communities, predominantly the Christian group which came and met with the Prophet, peace be upon him.

The student will also study this suras depiction of those who have truly disbelieved is actually a depiction of people who after knowing the Truth inside and out reject it.

Allah also gives good qualities for some of the People of the Book who pray, who have taqwa, who compete in doing good deeds and its relevance to us Muslims.

When the student gets to the end of this amazing Surah, which is the Surah to recite when Muslims are in tough times, especially the ayat of what happened in Uhud, we have one of the most spiritually profound prayers in the entire Qur’an.

This prayer actually becomes a twin to the prayer which is at the end of Surah Al-Baqarah.

Shaikh Musleh Khan was born in Madinah, Saudi Arabia. He was raised and is currently residing in Toronto, Canada. At college he studied computer programming and then went to work as a Fraud analyst. In 2002 Shaikh Musleh was accepted at the Islamic University of Madinah where he completed a diploma in Arabic followed by a BA in Islamic Law from the faculty of Da'wah and Usool al-deen. He memorised the Qur'an with an ijaza and has completed a complete study of Sahih al-Bukhari.Shaikh Musleh undertook a study of various Islamic books including those on Fiqh, Hadith, Aqidah, Tafsir. Futhermore, he took classes with various prominent scholars in the course of his time in Madinah, including Sheikh Mukhtar Al-Shanqiiti, Sheikh Muhsin Al-Abaad, Sheikh Abd al-Razak, and Sheikh Muhammad Shafi among others.Upon graduating in 2011 he has returned to Canada and has plans to pursue a Masters at York University, Toronto. He has been very active in the Toronto vicinity for more than 10 years, having conducted khutbahs, classes, lectures and conferences, as well as various Islamic Intensive programs in the United States. Shaikh Musleh enjoys long-distance running and basketball. He loves to read and write in addition to spending time preparing for classes in Toronto where he and his wife reside. 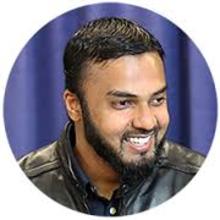